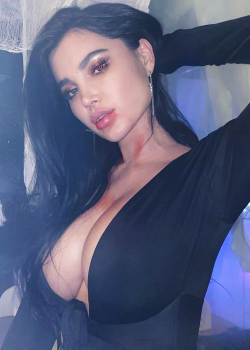 facts
•
Went by the name Mina Tassie Yahontov until 2020 when Andrei came back into her life. She realized how wrong Mina sounded with Andrei - Tassie was just right.


•
Has run unopposed for Patefacio's Vampire Representative position since she was first awarded it by Patefacio Founders.


•
Contributed money to the building of Patefacio upon her approval as the representative.


•
Her oldest little sister Anastasia is a ballet dancer and has worked with many companies through the years, only leaving when she absolutely has to.


•
Her middle sister of the younger three, Karine has worked as a lawyer since women were first allowed to do it. She loves to argue.


•
Her youngest sibling is a brother named Kir. Kir is kind of a dick and thinks he's better than everyone. Tassie is waiting for a girl to come straighten him out because that's what he needs, but all he gets are dumb girls that don't know their ass from a hole in the ground.
biography
•
Born in the year 983, Tassie is a natural born vampire. She comes from a long line of more well-known vampires, who have managed to navigate themselves through prominent human families as royalty. So Tassie's station in life was always that of royalty and she grew up privileged.


•
Grew up with Andrei, the two were close friends and that eventually turned into romance as they grew into their bodies and began to recognize one another in a more romantic manner. They had always done as much flirting as two little kids could do, and Tassie swore she was going to marry him one day. But that day never came. When they were in their mid-20s, Andrei was kidnapped and forcefully changed into a vampire. It was a topic they had been discussing amongst themselves, but Andrei hadn't come to a decision. She found out about him being taken and changed and they told her he didn't make it through the change. That he had died.


•
Tassie's life of royalty ran into the ground and into ruin. She went on a spree, her rage burning bright as she killed approximately 100 people. She was snapped out of it by her father who forced her to come home. Which is when Tassie found out she was pregnant.


•
When their daughter was born, the world changed for Tassie in a massive way. She named her Andra in memory of her father and gave her his surname. She did her best to be a good mother, taking it on with the help of her own mother. For some reason, her father wanted nothing to do with the baby. A fact she never understood, but she didn't push. It wasn't her place.


•
It took time before Tassie became unwound about Andrei's death. She had to focus on caring for their child. Eventually, she found herself capable of living beyond his death and she put herself back into the life of royalty. But she didn't take on another lover. She enjoyed that life for a few hundred years and lavished their daughter in attention and care, sticking with her parents for a little while before venturing off on her own to do the same. But as royalty started to fade compared to its previous vastness, she took her fortune and went off on her own to make a name for herself and her daughter.


•
She was recruited as a member of the Vampire Council in 1706 where she met and married her first husband Benjamin. She had been celibate for hundreds of years and had no desire prior to meeting Benjamin to change that, but he lit a spark in her that no one had since Andrei. But even that spark paled in comparison to how Andrei made her feel. No one would be his equal in her heart or in her life.


•
Benjamin was a higher ranking member of the Council so when their marriage absolved in 1824, she was booted from the Council and sent on her own. She was absolutely pissed and retaliated by burning Benjamin's house down as well as his storage unit where he kept all of his valuables - but not before robbing it first. But he never knew it was her because she made sure he knew she was leaving the area and going to settle across the continent.


•
She offloaded the stolen goods, taking whatever people offered even if it wasn't a lot just to be rid of it. And she didn't care if she got full value, she'd gotten what she wanted from the items - her ex-husband's misery.


•
She floated around for some time after, reconnecting with her parents a few times and settling in with them in their new life. She got to meet some of her newer siblings that they had that she hadn't met. She bonded with them, watched them, taught them.


•
In 1901, she found out Benjamin had died two years earlier, murdered by the wife he took on after his divorce from Tassie. She found it amusing, and sought out the Council to rejoin and they welcomed her back, where she is still a member to this day.


•
In 2009, the Council was contacted by Patefacio asking if they had any member interested in becoming the Vampire Representative. Tassie did not volunteer, rather, she was chosen. So, not wanting to cause any problems, she agreed and moved in in 2010, a few months before the city was opened to the public. It was there that she met with the government and the other representatives and set about tentative rules for each faction as well as the general laws that individuals on Patefacio would follow. Her rule that turned into law? No biting unwilling individuals. That meant no turning humans into a vampire without their consent and that meant you couldn't lure someone into an alleyway and bite them. The fact that it even took them that long to come to that decision astounded her. For a city of peace, they hadn't considered every option.


•
She's been representative since the opening of the city, having been voted in each time. She's up for a vote again this year (2020) and once again she has no opponents.


•
She works closely with her Council of 12 members, one of whom is Xavier Drake. She takes a lot of what he says under advisement more than others because he is in touch with most of the vampire population on a weekly basis.
appearance
Tassie is pretty tall for a female, standing at 5'8". She is thin but her body is toned from exercise and her skin has a nice honey color to it. She has long black hair and hazel eyes. She's busty and has a nice enough ass if you ask her. She doesn't have any tattoos or piercings and has no desire as of right now to get any. She dresses very feminine and likes to show off her assets with low-cut shirts or tight-fitting clothing. She does this even at home, though she won't snub her nose as walking around in nothing or in a nice baggy shirt to let her body be free.

personality
When she young, she was happy and sweet and innocent and skirted along the naive path. That was until the love of her life was stolen from her and she was told he was dead. That broke any happy, sweet, innocent, and naive part of her and it was all thrown away. She went into the first fit of rage in her life and in the end, she was forever changed. She stayed living in the lap of luxury as she raised her daughter so she was comfortable and put up a facade to keep the others happy, but inside she still burned with rage and she was unbelievably sad. The only light pulling her from the darkness was Andra and knowing she had to provide a life for this beautiful little girl. She found a slither of happiness with her now ex-husband Benjamin but the relationship was always iffy, even though it lasted as long as it did. Andra didn't like him and didn't want her to be with him, but she couldn't let him go. She saw him as her one chance to be happy again. Ultimately he wasn't it and the dissolution of their marriage made her bitter again. She's skated through life finding happiness in the little things, like spending time with her daughter and eating good food.

likes
being a mother, coffee and tea of all kinds, ice cold water, cuddling, fresh out of the dryer blankets, toe curling sex, singing at the top of her lungs, cats and dogs even though she doesn't have either, fresh oranges, swimming, laying out by the pool, blood, long makeout sessions, heavy petting, dancing around the house in her underwear, holding andrei, action movies, summer, shopping, teasing andrei, candles, being photographed, getting a massage, walking, people watching

dislikes
catty women, people who are assholes just for the sake of being assholes, excessive body hair, liars, hypocrites, people who cheat, hail, being in the mountains, drinking, romantic movies, sleeping with the lights on, people with no fucking manners, people who stare, the sound of bells