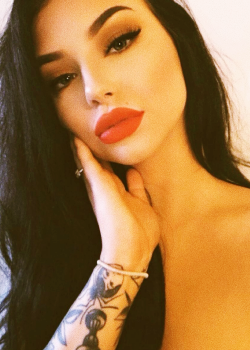 hometown
In the Middle East, probably

facts
•
Jasmine travels light, but when she's situated in a place for a long time she collects things. Most of it she sells when she moves but trinkets she likes get sent to a storage unit she has, which is a warehouse in London.


•
Jasmine has tried throughout her life to find someone to settle down with since Aleksi never seemed interested in, but none of the relationships stuck because she refused to get married. At least that was the problem in earlier years, lately it was because she didn't want to rush into sex and wasn't looking for casual sex.
biography
•
Jasmine can't tell you her birth name. She can't tell you when she was born. She can't tell you where she's from. She can say that she has existed for millennia and she cannot die, though she is not invulnerable. She just heals and repairs very quickly.


•
She is not Death, she is a creation of Death made to do his bidding because he's lazy. She does not kill people, she is just a reaper of souls. She takes what Death gives and guides them to the other side. She does not carry a scythe or wear black robes. She exists by blending in.


•
Jasmine is not just a Reaper, she is the first. Ostensibly, she will be the very last. As time went on, she saw Reapers come and go, but never her. She learned through watching them be there one day and then not the next. It was a hard lesson at first, but one that became easier over time.


•
Reapers are grouped off and given different forms of death that they are in charge of. There are reapers for old age and reapers for plagues. Jasmine has and always will be a reaper over artificial means of death such as accidents, suicides, and homicides. So too is her group on Patefacio. However, Jasmine is capable of taking the souls of anyone unlike other reapers.


•
Daily, Jasmine receives her group's assignments from an unnamed and unseen deliverer and then transcribes them onto sticky notes to give to her charges. This only started once other Reapers became a thing, she received only general places to be when the world first began. Death was so much more common and widespread back then. There were so many souls. If you asked, she'd say she missed those days.


•
Jasmine has amassed a fortune during her lifetime and does not do work aside from her Reaper duties, choosing to live off of that fortune. She does this so she has time to carefully find and obtain her assignments for the day. The rest of her time is spent reading. She makes it a personal challenge to read 100 books a year and has thus far managed to do that over the last ten years.


•
Spent time in Germany in World War II, she helped ease souls on to their final resting place. It was all she could do, and she did it fast so they didn't have to linger on this plane for too long after their violent and horrible deaths. She'd spent a lot of time in wars and saw millions of people die but there was something so grieviously wrong with how this was handled and at first she thought Morrigan was at fault, but she wasn't. Which made this even worse in her mind - this was a human in his purest form doing what he felt on his own. Without provocation from Morrigan. She developed a new sense of humanity during that time, and not just on behalf of Hitler and Germany but upon the United States as well and their response with the bombings of Hiroshima and Nagasaki. War was evolving, and it still is.


•
Her ability to regenerate has helped her in many situations in her life. As mentioned, she cannot die, but she's no invulnerable, and so she's taken some hits in her life while doing her job, especially in these wartorn arenas. She's learned to fight through all of that, however, and can easily take better care of herself these days if she puts her mind to it. Though one thing stays true from the day she discovered them - she is not a fan of guns. She'd use one if she had to because she fully believes in the "don't bring a knife to a gun fight" saying, but she does not like them and does not own one.
appearance
Jasmine is the average height for women, standing at only 5'4" tall. She is thin, has a light tan tone to her skin, and long black hair. She has a number of tattoos and she has her belly button pierced. She loves makeup and wears it more often than not because she feels she looks prettier in it, even though she knows she's pretty regardless. It just helps her feel even more so. She loves to dress in jeans and leggings and is rarely seen in shorts, but she loves dresses (the shorter the better). She loves to wear hoodies, cropped tops, tied tops, and she loves bodysuits. She likes to wear earrings and necklaces, both long and short, and she sometimes wears rings and bracelets. She sometimes gets fake nails that she keeps relatively long.

personality
Jasmine is hard to sum up. Not because she's difficult or because her personality is so vast that it's hard to quantify, but because her personality isn't one set thing. She doesn't have multiple personality disorder or anything, but her personality changes with her mood. But she's pretty chill most of the time. In general, she's a very empathetic person, something that has developed after thousands of years of taking souls. You kind of begin to feel for these people, though this didn't develop until much later in her life. She reminds herself, though, that no matter how empathetic she is, she cannot not do her job, and she's never once faltered in doing it.

dislikes
incense, valentine's day, prolonged exposure to old people, stunningly hot days, freezing cold days, stuck up people, judgy people, arrogant people, people with a holier-than-thou attitude (do not fuck with her, she will steal your soul), being late, people who are late, people who pick on her height